It is summer, and there is never a better time for a good story. This podcast is the type of story best told over a campfire, where the your senses are heightened, your imagination keen, and your edges of the night leave you susceptible to a different reality.

This is the first of a four part series. It is the remarkable story of a spiritual quest for truth by a Phd psychology student. It starts in the comfort of suburban California and then takes off, to Hawaii, Asia, South America, and back. It’s part Raiders of the Lost Ark,  and part Cheryl Stayed’s Wild, all told from the perspective of a Margaret Mead. And it’s the first time this story has been told.

Wendy Wagner was a young PhD candidate. She’d already surmised that the standard suburban psychology practice was not going to be for her. She had far too many questions about the modern religious/spiritual paradigm. Then there was the Course in Miracles which pointed her towards a way of life that differed dramatically from the social fabric of the late seventies and early eighties.

In this opening sequence of events, Wendy finds herself testing her own courage as she hikes Kalalau Trail on the north west coast of Kauai.  Even though she’s never backpacked, Wendy sets out on the narrow trail which plunges as much as four thousand feet to the Pacific Ocean. A simple misstep could be fatal.

This trip challenges her courage and beliefs, and raises far more questions than it answers.  And those remaining questions propel Wendy to Asia and ultimately to South America on her personal quest for spiritual truth.

Here is part one of the story. Enjoy! 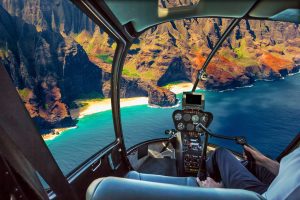 The view from the helicopter cockpit above the Na Pali coast, Kauai, Hawaii. (Check out the story to understand the importance of this photo.)

Panorama of the jagged cliffs in Kalalau Valley on the Na Pali Coast, Kauai, Hawaii

The steep terrain makes for a hazardous climb 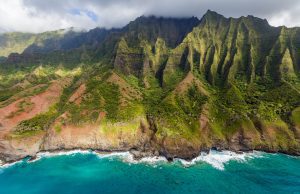 To The Na Pali Coast and Back

Next week, the next leg of the adventure that will eventually lead Wendy to follow the Sheik’s directions as she heads for Bolivia.